Dennis Spring began playing the violin in the 4th grade, studying classical music. But he always listened to everything, and took interest in many styles and genres, including the traditional Irish music his grandmother sang to him, and popular music of the day.
In high school, he taught himself guitar and bass, and his first professional experience was playing bass in a dance band in Detroit.

Dennis was hired in 1978 as a first violinist with the Charlotte Symphony Orchestra, and was also the leader of the Symphony String Quartet for over 15 years. He was also the Concertmaster of the Charlotte Pops Orchestra, before it was absorbed by the CSO.
The CSO performed Dennis’ arrangement titled Bluegrass Medley with Dennis playing the fiddle solo. Dennis performed as soloist on “The Orange blossom Special” at a Pops Concert in Freedom Park.

As a recording studio musician, he put together string groups for background tracks on Gospel, Rhythm & Blues, Jazz, Beach, Country, and Folk albums, and radio Jingles and movies.

Dennis loves Irish music and Celtic music, and performs around the Charlotte regional. In 1997, he won 1st place in the Instrumental Division and 2nd place in the Vocal Division at the Southern Classic Feis in Atlanta. 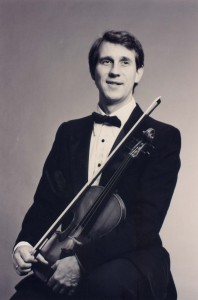 Dennis, in the Charlotte Symphony Orchestra

Go to facebook.com and search for Dennis.Fiddle.Spring.